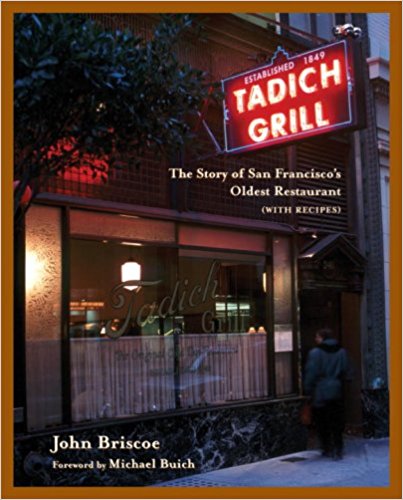 San Francisco was not established as a town or city for all practical purposes until 1849, more than 200 years after New York and Boston had been founded. And yet, not more than 20 years later—not later than 1869, that is—the French author Alexandre Dumas, who didn’t write his several hundred novels but did write a monumental encyclopedia of cuisine, wrote that San Francisco was the second-greatest restaurant city in the world, after Paris. Today, notwithstanding its youth, San Francisco is home to three of the five oldest restaurants in the United States. Tadich Grill, established in 1849, the year of the city’s true founding, is the third-oldest restaurant in the country, and the oldest in San Francisco.

The story of Tadich Grill cannot be separated from the story of its city, and of its city’s culinary heritage. And so Tadich Grill reviews the city’s astonishing history and its culinary scene from those heady early days of the gold rush, explaining how on earth the infant city in those years before the transcontinental railroad and the Panama Canal became a culinary capital that attracted the attention of that notable Parisian.

“…a capsule history of the city itself as seen through a culinary lens.”
—San Francisco Chronicle
“[A]n intimate portrait of the celebrated eatery.”
—Publishers Weekly

“…written with wit and an obvious warm love for the restaurant.”
—Charles A. Fracchia, Panorama